Eradicating Trachoma in the Indigenous population 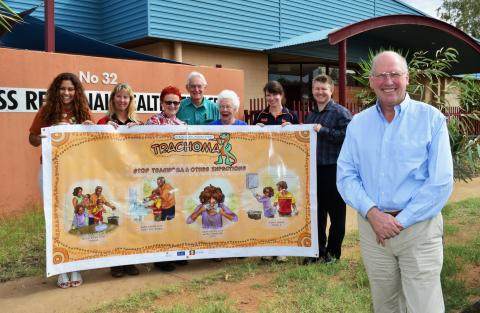 In 2009 the Aspen Foundation partnered with the University of Melbourne’s Indigenous Eye Health Unit led by Professor Hugh Taylor and the Christian Blind Mission, to eradicate Trachoma in the Indigenous population.

Trachoma is the number one preventable cause of blindness. It is a waterborne disease that is similar to a severe case of conjunctivitis. Trachoma is highly infectious and is mainly spread in places that have poor sanitation and lack clean water. If untreated, this condition leads to the formation of irreversible corneal opacities and blindness. Trachoma was eradicated in all developed countries in the 1920s except for Australia where it is still prevalent in remote Indigenous communities in Western Australia and the Northern Territory. Australia is the only developed nation where people can still go blind because of Trachoma.

In May 2014 the University of Melbourne Indigenous Eye Health Unit launched two free clinical online training modules on eye health – Trachoma and Eye Health and Diabetes. The modules were developed in conjunction with the Christian Blind Mission and Aspen Medical’s Remote Area Health Corps (RAHC) and funded by the Aspen Foundation together with CBM Australia. The two free clinical online training modules have been accessed by over 330 Health Professionals since their launch.

Professor Hugh Taylor has explained the Trachoma and Eye Health and Diabetes modules in the following two short videos: